Zoetis.ie uses cookies to improve your experience when browsing our website. By continuing to use this site, you are agreeing to their use. To find out more click here 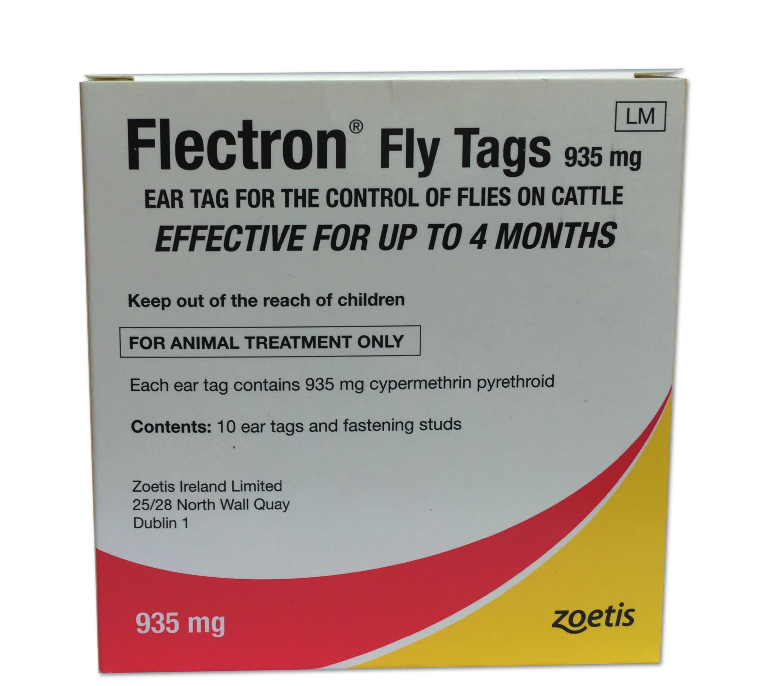 Flectron Fly Tags for cattle are for season long control of nuisance and biting flies. Take the hassle out of fly control with Flectron ear tags for up to 4 months fly control.

Flectron eartags can control flies for up to 4 months when used as directed. For maximum benefit they should therefore be applied at the beginning of the season before fly populations build up. For complete control the entire herd should be tagged.

One tag per animal is usually sufficient to achieve acceptable levels of fly control. However, where head and face fly attack is very severe, two tags may be necessary, one on each ear.

Tags should be removed before cattle leave the farm for slaughter.

Flectron eartags should be attached to the ear as follows:

Load stud and tag into the applicator according to the manufacturer's directions. Restrain the animal, preferably in a crush, so that the ear can be reached easily. Position the point of the fixing stud between the blood vessels in an area of firm tissue halfway between the head and the tip of the ear. A position between the second and third rib of the ear is ideal.

Depress the applicator until a click is heard. This means the tag and the fixing are firmly secured.

If a tag is lost during the season it is usually because of poor application. Flectron ear tags will remain flexible and active for a season.

Flectron ear tags are not recommended for fly control on cattle kept in feed lots or in animal housing.

Tags should be removed at the end of each fly season and before cattle go for slaughter.

The neck of the stud behind the ear can be cut with round-nosed scissors. The new tag can be applied through the hole left by the previous one.

- Rubber gloves should be worn when handling the fly tags.

- Tags should be removed before cattle leave the farm for slaughter.

- Do not burn, can produce harmful vapour.

- Wash hands and exposed skin before meals and after work.

<<Back to Dairy Cattle Products