Worm burdens in animals at pasture are an inevitable fact of farming in Ireland. Turn-out is a good time for farmers to plan their grazing and worming strategies for the season to protect their cattle and maintain the effectiveness of wormers on their farm for the future.

Worming strategies to maintain effectiveness of wormers in the future include:

Prior to turn-out farmers should consider the following:

4. When is turn-out planned for?
5. When are animals generally housed?

Answering these questions can help farmers identify an effective parasite control programme with their adviser.

Once the most appropriate option has been identified farmers can be guided to a suitable protocol in the Dosing Planner below and treatment dates, which depend on turn-out and housing dates, can be filled in on the planner. 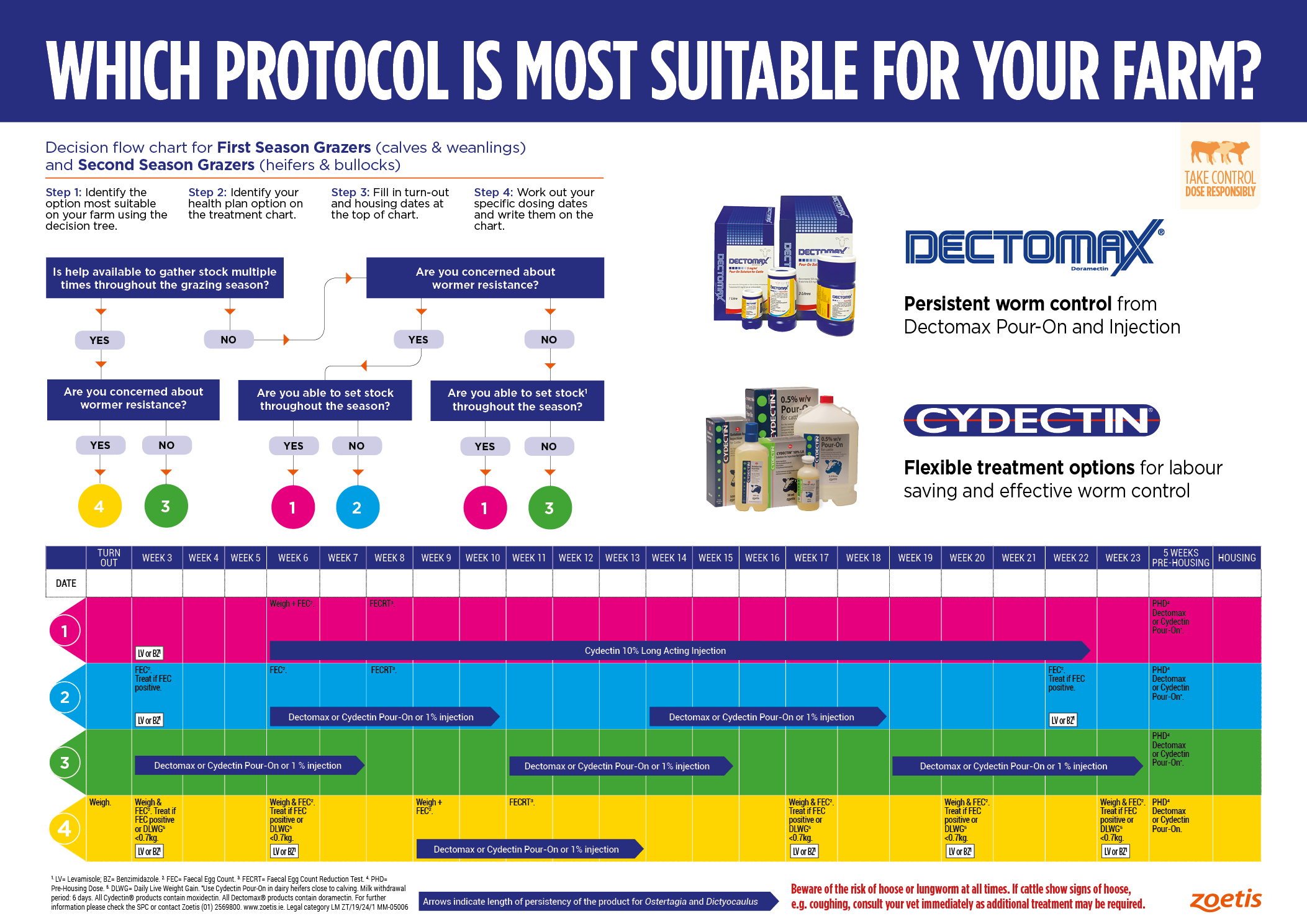 FEC monitoring provides information about the stomach and gut worm status of a herd. At least 10 cattle in the group should be sampled. The animals sampled should be healthy and have had full access to pasture and/or feed before sampling because counts are reported as eggs per gram (epg) of faeces and variation in faecal output will affect the count. If cattle have been held off feed for more than a few hours before sampling, or if any animals included in the sample are inappetant due to illness, the FEC will be difficult or impossible to interpret. Either bring cattle in and collect rectal samples or animals can be sampled while at pasture.  Only collect samples from dung that you actually see being passed.

Samples should be kept cool (not frozen) in an airtight container or plastic bag, before delivery to the laboratory within 48 hours. If the faeces are too old, some eggs will have hatched and the reported egg count will be an underestimate. If grazing calves have FECs > 200, and the faecal samples have been collected appropriately, it can be assumed that that treatment is justified.

How to perform a Faecal Egg Count Reduction Test (FECRT):

A faecal egg count reduction test (FECRT) can help to determine the effectiveness of a wormer. A reduction in FEC of less than 95% of the pre-treatment egg count is suggestive of a lack of wormer efficacy if the correct dosing procedure has been carried out. Animals should be weighed and dosed accordingly with a properly calibrated dosing gun.

Faecal samples of 10 animals should be collected at the time of dosing and then again from the same animals at the following time periods after treatment.

Dairy heifers are expected to grow 0.7 to 0.8kg per day, on average, to meet targets for breeding and calving. Heifers growing less than 0.7kg per day, could be suffering from a worm burden. Target Daily Live Weight Gains (DLWG) for growing beef cattle are in the region of 0.7-1.2 kg and may vary depending on cattle type, system and target market.

To work out DLWG, record weight at two different timepoints. DLWG can then be worked out with the following formula:

Hoose (lungworm) is an added complication in cattle. Unfortunately, lungworm causes disease and death before they become adults and before they are detectable in dung. The best on farm test for lungworm are the farmer’s own ears! If cattle are coughing while at grass in the summer or autumn, and if they have not been dosed recently with a persistent dosing product, it is quite likely they have lungworm and need to be dosed as soon as possible.

The material on this site is intended for farmers, vets and SQPs based in Ireland only. By continuing to browse the site, you confirm that this describes you.

Alternatively you can contact us at VetSupportIreland@Zoetis.com or phone
(01) 2569800

Tweets about from: Zoetis Ireland